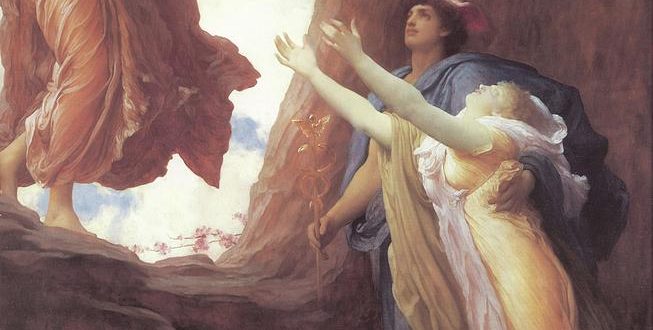 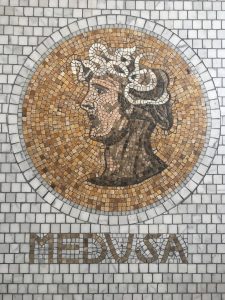 The Greeks found extraordinary natural wonders on the island, inspiring them to invent beautiful legends. They found nymphs in the freshwater springs at Syracuse, monsters in the narrow sea-passage at Messina and gods in the formidable power of Mount Etna. Although Sicily plays a major part in Homer’s Odyssey, there are many myths that aren’t found in the great books. Here is a list of some of Sicily’s most interesting legends and mythologies, whether or not you’ve read the classics.

Aci and the Nymphs

There are many tales of nymphs inhabiting Sicily. Cults like the Ortygian and the Hymerian orders worshiped Neptune’s daughters near freshwater sources. Santa Maria la Scala in Sicily was the ancient home of the nymphs who retold the love story of the shepherd Aci.

Galatea was a water nymph in love with Aci, a herdsman on the slopes of Etna. When Galatea rejects the amorous advances of the jealous Polyphemus, the monstrous cyclops throws a boulder to kill her lover. Neptune – Galatea’s father – turns the dead lover into a river so he can flow to the sea for eternity and reunite with Galatea. To this day the villages at the base of Etna still have the name Aci associated with them (Acitrezza, Acicastello, Acireale, etc.)

Here, again, Polyphemus rears his ugly head (all puns intended). According to the famous epic poem by Homer, the mythical one-eyed Cyclops lived under Mount Etna. The savage monster trapped Ulysses and his men in his cave yet kept them captive, blocking the cave’s opening with a gigantic stone. The cyclops devoured a few of Ulysses’s crew members as an apéritif and the others he designed to eat over subsequent meals and midnight snacks.

One morning as Polyphemus was tending his sheep, Ulysses – trapped in the giant’s cave – finds a large stake and hardens it in the fire. The cyclops opens the cave (returning from the fields) and Ulysses gets him drunk with the wine given to the hero by a priest of Apollo. As soon as the monster falls asleep, Ulysses blinds him in his one good eye. The remaining crew quickly hide themselves underneath the sheep to escape the cave. Polyphemus, realizing it was Ulysses who tricked him, throws massive boulders into the sea to prevent his escape. Today, boulders called the Cyclops Islands are located just east of Aci Castello, north of Catania.

There are many versions of how the Trinacia (or the Krinacria in the local dialect, from the Greek 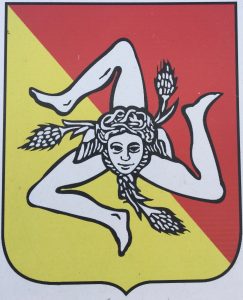 “triskeles”) came to Sicily. This three-legged symbol of the island may have Middle Eastern roots (as suggested by Nini Radicini in 2006) But we’re more interested in the mythology. Once again, Sicily and nymphs are connected in one of our favorite versions of the legend…

Many years ago, three nymphs danced all over the world. As they danced, they gathered with them handfuls of fruits, seeds and earth from the most beautiful and fertile places on the planet. One day they arrived in a land which had a beautiful blue sky and a calm sea. It was here the dance became more beautiful and joyous. The three nymphs threw everything they had collected into the ocean. The water sparkled and formed a rainbow: from the depths of the water appeared a new triangular land. Sicily was born. Thus the three legs are those of the female dancers (representing the three capes of Sicily’s corners); the wheat in the Trinacria signifies the abundance of cops on the island; and medusa is the symbol of Athena: protectress of the island. 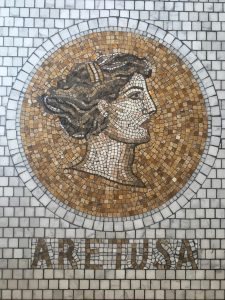 If you’ve spent any time in Syracuse, you’ll notice the curious fresh-water spring in Ortygia. According to The Routledge Handbook of Greek Mythology, there are theories on how the Gods brought fresh water springs to the coast of Sicily. In Ortygia, again, the nymphs have the upper hand.

The most interesting version comes from Ovid. He explains how Arethousa was a Peloponnesian nymph, more interested in hunting than love. She inadvertently awakened the desires of Alpheios by bathing naked in his streams after hunting. The river god pursued the nymph, but Artemis (the goddess of the hunt) protected her. Artemis created a cleft in the ground and transformed Arethousa into a fresh-water spring. Here, Artemis flowed Arethousa underground, all the way to Syracuse, so the river god’s waters wouldn’t sully the water nymph.

The continent’s largest active volcano is vital to Greek mythology, although it’s not the only volcano in town. The revolt against the gods has given Etna her fury.  In the great battle between Gods and Titans, Zeus, defending his title against the uprising beasts, defeats Typhon. Often depicted as a lawless and vicious monster with multiple heads, Typhon’s wrath is unsurpassed. Zeus covers Typhon under a massive pile of rock. Again, Routledge describes how Zeus, “completed his victory by burying him under Mount Etna.” Hence the Greeks could explain the flame and smoke that erupted from Etna by the fury of the defeated Typhon.

Scylla and the Straits of Messina

The Odyssey offers great monsters around the island. In Book 12, Homer presents the story of Ulysses who – warned by the witch Circe – steers his ship away from Charybdis and certain death. However, he navigates close to the other side of the straits, near Scylla’s layer. The Encyclopedia of the Ancient Greek World describes Scylla with six heads and twelve legs and would normally feed on fish, but would gladly grab and devour men from any passing ship. In fact, Scylla snatches six of Odysseus’s men. Yet the ship continues on its journey, giving light to the expression, “Steering on Scylla to avoid Charybdis” – or – choosing the lesser of two evils.

Demeter, Persephone and the Seasons

One myth vaguely placed in Sicily is the story of Persephone (Kore) and her abduction by Hades. Kore was the daughter of the grain goddess, Demeter. The story details Persephone gathering flowers when her uncle – Hades, the god of the underworld – approaches her to be the queen of his kingdom. Demeter, frantically searching for her daughter, forgets her harvest duties, casting the world under four months of cold and barren temperatures.

She eventually appeals to Zeus who orders Persephone to return to her mother eight months of the year. However, since she ate four pomegranate seeds in Hades’s underworld, she must go back as the queen of the dark realm four months of the year.

Orphism was popular among the Greeks in Sicily around 600 B.C. This cult focused on reincarnation after death and the concept of passing to the underworld and back became popular. As a result, Persephone’s myth became localized in Sicily. Hades supposedly abducted Persephone near Henna (Enna) and Demeter lit two torches from the fires of Etna during the nocturnal search of her daughter. The discovery of the statue of Hades and his blue beard at Enna is proof of the presence of this religious sect – or possibly of the legend itself!