The artichoke from Sicily has a place on your dining room table. The delicious edible part as the beautiful, budding, violet flower grows under tough, coarse leaves. It’s such a contradiction. How do we get the goodness of artichokes from garden to plate? After all it should be in everyone’s kitchen. It wasn’t always in mine. 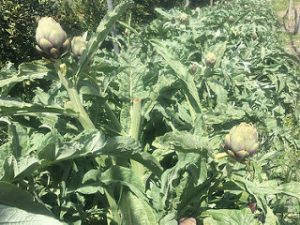 My first artichoke experience occurred when my dad sent me on an airplane to Philadelphia. I watched my Aunt trim, cut, peel, and soak these blossoms. Eventually their hearts were laid to rest in two massive Mason jars under copious amounts of olive oil. Wrapped in only twine and brown paper for travel, the packages were slick by the time I reached Boston. Still, they were the most delicious artichokes I had ever eaten.

Artichoke season is presently upon us in Sicily. Now is the time to discover the antioxidant benefits of these flavorful purple treasures. Here are 5 reasons why you should pick some up from your local farmer tonight:

The easiest way to prepare the artichoke is by boiling it (its simplest form). Cut off the stems and remove the tough, outside layers. Boil some water in a pot and drop in the artichokes. It takes approximately 30 minutes or until the outside layers are soft and peel off easily. Have them cool on a plate for a while before dressing with a little olive oil and salt. Buon appetito!! 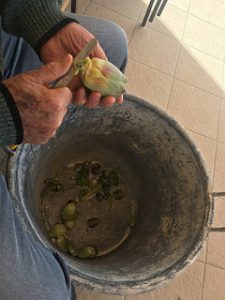 Most people open up a can of hearts and stick in a fork. But if you’re in Sicily, chances are you’ll have the whole artichoke sitting on your plate. What do you do?

Eating a whole artichoke is a delight if you put down your fork and go in hands first. Pull off the soft outside leaves one-by-one (they’ll detach easily). Hold the leaf between your teeth and bite down gently. Slowly pull the leaf out of your mouth, scraping the pulp with your teeth. The leaves closer to the heart are softer and have more pulp. If the leaves are too tough on the outside or the pulp does not come off easily then the artichoke hasn’t been boiled long enough. Strip off these outside leaves and get to the softer ones on the inside.

A part from its antioxidant properties, artichokes also help rid the body of lipoprotein (a.k.a: “bad”) cholesterol by increasing bile levels in the liver. Packed full of phytonutrients, they help protect against heart disease, liver dysfunction, diabetes and some forms of cancer. They are also full of Vitamin C, fiber and folate (helping the body create DNA material and assisting cells divide).

The Ancients Knew a Thing or Two: 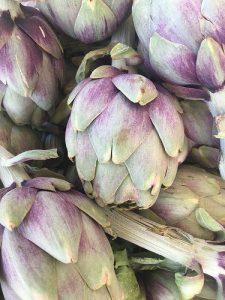 Botanists consider the artichoke to be native to North Africa and Sicily. There are also documents attesting to its cultivation by the Greeks and Romans. Pliny the Elder wrote specifically how the artichoke was good for refreshing the breath and promoting the conception of boys. No surprise it maintained its notoriety well through the European kingdoms of the middle ages into the Kings’ courts of France. It was brought to America after the discovery of the New World after a vast linguistic modification of the original word (Arabic al-karsufa; Italian articiocco; English artichoke).

Born from the Gods:

Like most Mediterranean food, the mythological origins of the artichoke are rather fascinating (considering it is such a modest vegetable). Zeus was on his ways to visit his brother Poseidon when he came upon a stunningly beautiful woman, Cynara. Falling in love, Zeus offered to make her into a goddess to live with him on Mount Olympus, keeping him occupied when Zeus’s wife, Hera, was out of town. Cynara grudgingly agreed and, when the divine life became too dull for her, snuck away and visited her mortal mother. Zeus, hearing of Cynara’s betrayal, cast her from Mount Olympus forever, turning her into an artichoke plant: strong and resilient yet delicate and beautiful.