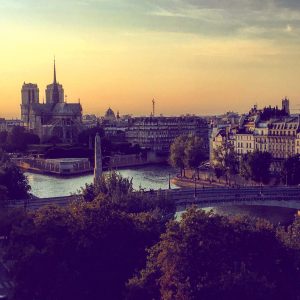 Human compassion transcends all things. Like Notre Dame de Paris transcends religion. Sometimes, we do great things and we rally when there is a call.

If there is one benefit of the internet’s immediacy, it’s the ability to get news quickly. It also shows us the human response to whatever news is upon us.

Notre Dame de Paris is no exception. It’s impossible now to scroll through any feed without seeing the extraordinary images of Paris’s most popular church ablaze. NPR’s update first appeared on my phone a few days ago. CBS reports the fire was most likely provoked by a short-circuit somewhere in the work-zone yet dozens of detectives are investigating the exact cause of the blaze. As the investigation and clean-up process continues, it is more than likely no one will have any answers for quite some time.

However, this tragedy has provoked the most astonishing outpouring of emotion from anyone who has visited the massive cathedral, and from those who haven’t.

The cathedral has a remarkable history and is no stranger to destruction. Construction began in 1163 and lasted for 200 years. Over the course of the next 800 years, the church has seen its share of glory and tragedy. In 1431, they crowned Henry VI of England inside the cathedral and Napoleon was crowned emperor in 1804. Notre Dame has survived wars from neighboring countries, weather from severe skies, riots from wild townspeople and the tyranny of dictators. The spire once fell in 1786 due to wearing at the structure’s base but was replaced by restorers. During the French Revolution, the militias used the cathedral as a warehouse, causing it to fall into neglect. Her bells were melted to make cannonballs in 1791.

Notre Dame de Paris lies on the Île de la Cité: the island carved out of the rock by the meandering river Seine. The Romans founded the ancient city Lutèce (where the cathedral stands today) on the old Gaul settlement. They built the city to control commerce along the river. However, the Gauls occupied Paris and the surrounding areas almost 200 years before the Romans appeared.

In fact, Notre Dame de Paris falls within the top three attractions in Paris (behind the Eiffel Tower and 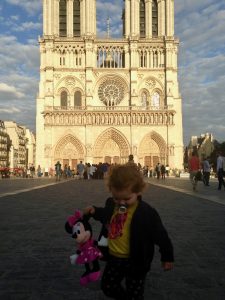 the Louvre Museum).  Anyone who has been fortunate enough to see the cathedral in person can understand why. It is one of the best examples of Gothic architecture in the world. In particular, the flying buttresses, stained glass windows, pointed arches, and grotesque gargoyles make Notre Dame even more unique. The beautiful and operational pipe organ dating back to the 17th C. is a masterpiece of sound.  In addition, the rose windows, the artifacts and even the roof-top beehives are elements that made this cathedral more than a simple church.

Notre Dame extends beyond its Catholic heritage and touches all denominations who visit it. It is a yardstick of the human existence – however small – and stands as a testament of the wonderful things human beings are capable of doing.

The internet let the public know quickly what happened to this historic monument. But social media channeled the public’s compassion into channels of empathic grief. Pictures of loved ones and couples standing in front of the massive cathedral doors flooded the web; expressions of dismay lingered in feeds as people reminisced about their fondest memory along the banks of the Seine, underneath the shadows of the famous church. I recall bringing my mother and my niece to Paris in 2003. We visited all the major sites in the City of Lights.  My most vivid recollection was when we sat on the Quai de la Tournelle. We ate Brie and Beaufort on fresh baguette, drinking a lovely grenache, as the sun set. We were not alone. There must have been hundreds of people that summer watching the formidable church in the twilight, listening to the bells strike the hour.

There are many stories about how much this church means to people, such as this article about the WWII sniper stationed atop the belltower. His family always lights a candle for him in the cathedral every time they are in Paris. An exemplary moment was the sounds of the bells during Paris’s liberation from the Nazis. My great-uncle (an intelligence officer in Paris) used to tell me about the ringing of the bells on Liberation Day. Or the most famous story of all: that of Victor Hugo. The celebrated author brought the church back to the attention of the Parisian public, igniting a preservation campaign in 1831.

Our Lady in Waiting

The BBC is listing the salvageable items on their website, and not all is lost. There is much work to be done. This cathedral is Notre Dame – Our Lady: she belongs to all of us. In the heart of Paris, turmoil and instability has worked against this iconic structure for over 800 years. We here at Arucimeli Resort understand the weight of tragedy and loss. But we also know how to band together and transform burden into blessing. Notre Dame has survived it all. Now her benefactors and patrons will rise to her aid, giving fresh life to an injured cathedral, as they have done times before. This symbol of Paris will return to her previous glory. The heart of Paris has not been broken.